Over 500 people march for Aboriginal rights in Melbourne

Friday's rally was surely one of the most inspiring Aboriginal rights rallies has seen in a long time! Over 500 people took to the streets to protest against the racist NT Intervention, loudly chanting 'Jenny Macklin, you disgust us, equal rights, and jobs with justice!'. 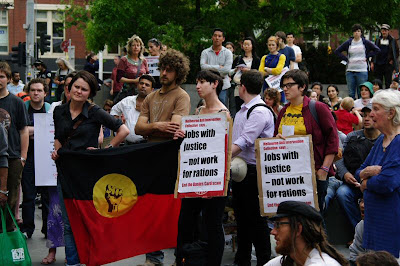 And 'jobs with justice' was our primary demand, as protesters expressed outrage at the near slave conditions that many Aboriginal people are living under in the Northern Territory. 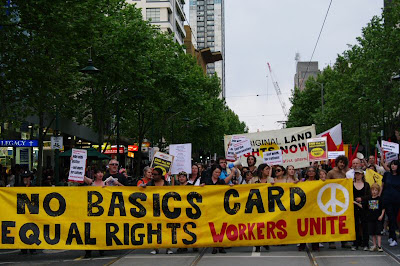 We demanded 'jobs with justice', we shut down the streets, we made the government take notice!
And we weren't alone, as people protested all around --in and . We had solidarity messages from , Adelaide and Newcastle. And of course, there was the inspriring strike of Gulrindji workers in the lead up to this National Day of Protest. Here are some of the reports from various media outlets: ABC, AAP, Crikey. 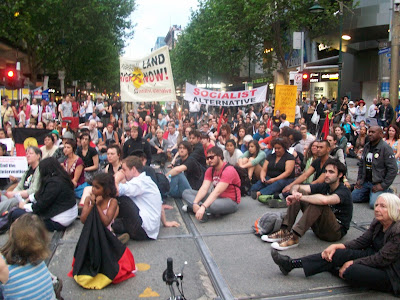 To win this campaign we need more of what we saw yesterday. We need bigger, better, and more often. Now is the time to commit to getting more involved. Come along to our special 'Jobs with Justice' meeting this Monday, where we'll talk about the rally and where to go from here.

Gary Foley (historian/writer/actor/activist)
No one can do it alone, we need you to help us build a large, vibrant campaign against the NT Intervention. We want to see lots of new faces at the next meeting, with lots of ideas!

Melbourne Anti-Intervention Collective (MAIC) meets every Monday, at the New International Bookshop (NIBS). The bookshop is easily found in the basement of the Trades Hall building (Lygon and Victoria Streets, ).

Details of what's coming up:
1st November (THIS MONDAY!!)
does a short overview of the ‘Jobs with Justice’ campaign. And we discuss where to now for MAIC and the campaign. A great meeting to come to, if you’ve never been before! 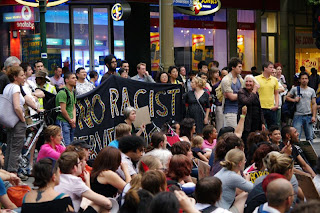 8th November (NEXT MONDAY)
Join us for a rare screening of the documentary film ‘How The West Was Lost’.
In the 1940s in the north-west of Australia secret congress was organized by Pilbara Elders Dooley Bin Bin and Clancy McKenna, alongside white unionist and communist Don McLeod. It was an unprecedented gathering, with over a dozen interpreters present to deal with the 23 languages of the many Aboriginal groups present.
This congress decided to organize a strike in the Pilbara region to demand better wages and conditions, and to draw attention to the treatment generally of Aboriginal people in .
On , Aboriginal workers walked off the sheep stations, marking the beginning of a carefully organized strike that was to last three years. It is considered one of the most significant (and least known) political actions in Australian history, and went on to inspire the Land Rights movement of the 1960s. 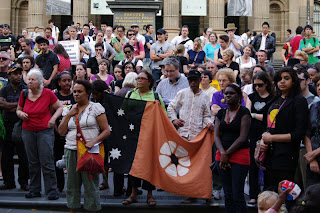 After the film we will have discussion, including a reportback from Alex who just came back from the north-west of WA where unions and Aboriginal activists are uniting once more. This time it's to fight against Liberal Premier Colin Barnett’s ‘compulsory acquisition’ of Aboriginal land for a Liquid Petroleum Gas Hub. 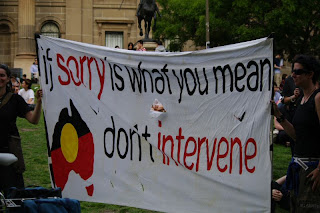 
Bans on teaching in Aboriginal language for the first four hours of the school day were introduced in 2008 following the roll out of the Northern Territory Intervention in 2007. Under the guise of “closing the gap” on Aboriginal disadvantage the Racial Discrimination Act was suspended, Aboriginal community land has been seized and community organisations, jobs and access to welfare payments have been dismantled.
The attempt to decimate bilingual programs was a territory government decision, but mimics perfectly the punitive logic of the federal intervention. Communities and Aboriginal culture are being attacked for the problems caused by all governments' chronic failure to support self determination for Aboriginal people. 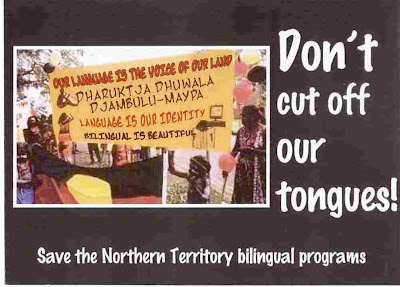 (and the weeks leading up to it)
MAIC wants to plan something BIG on this day. It is a day of mourning for many, but it is also a day of resistance! Come along to the MAIC meetings to help be a part of the organising. 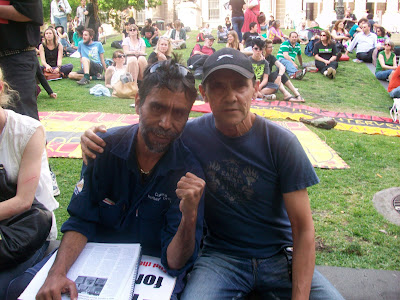 Melbourne Anti-Intervention Collective (MAIC) meets on the first and third Mondays of each month, 6.30pm on Level 4 of the rear building at Trades Hall, Lygon and Victoria Streets Carlton. 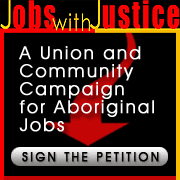 Getting started in 5 easy steps: 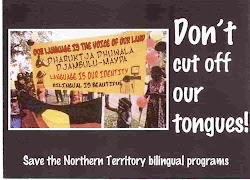 Please understand that we are a volunteer-based activist group and do not have a dedicated administrator. The best way of communicating with the decision makers of our group is to come to one of our fortnightly organising meetings.

Support what we do by transferring some money into our bank account.

MAIC is incredibly short of funds which means we don't get to do all we would like to do. Things like printing promotional material and paying for guest speakers to come down from the Northern Territory.

MAIC is not funded by any government bodies or other community groups - we rely on donations and volunteer time to do what we do. Support us!

Melbourne protest march against the NT Intervention in July 2010

What about the claims of child sex abuse?

RACISM in the MEDIA: ABC LATELINE on MUTITJULU,NT from Eleanor Gilbert on Vimeo.